Don’t Believe Everything You Read, or Hear, or See.

The Stanken’ Rose Gazette is a publication that uses satire to call attention to the fools, hypocrites and liars that run rampant in the media today.  Many of the articles you’ll see published on this site are absolute bullshit.  Totally made up. But they will not be pointless.  The satirical message I’ll leave up to you to discern.  There will also be articles that are 100% true, painstakingly researched and supported by documentation.  Then, of course there will be rants and philosophical discussions that, while the EDITOR believes them to be valid, might be the opposite of what you believe or adhere to.

Its up to you to decide what you want to believe or disbelieve.  And, last time I checked, I have the right to publish anything I want to, as long as it is not blatantly slanderous or libelous or hate-mongering or obscene.  Satire is one way to clothe slander and libel in a way that most consider “fair use.” And sometimes, the only way you can compete with a well told lie or a noisy psychopath is to do your best to out-lie them with something that is even more outrageous than anything they say.

A lie travels halfway around the world while the truth is still putting on its pants.

Its a struggle, especially with people like Donald Trump.

You won’t find any hate mongering or obscenity here, although you may find an occasional word that is on George Carlin’s list of bad words (goddamn, motherfucker, cocksucker, asshole, fuck or shit.)  I’ll try to keep these to a minimum.  But they’re just words, and occasionally, they’re the right word for the job, goddamn it! 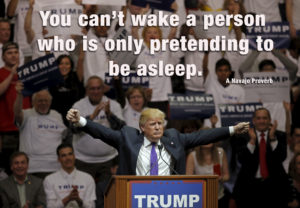 I’m particularly abhorred by the fact that, since January 20, 2017, a raving psychopath has been President of The United States. Nevertheless, this is a country ruled by law, and it would be obtuse of me to say something like “He’s Not My President” or other nonsense. Like it or not, he is my president–and yours — if you are an American citizen.

It’s time to face the reality that President Trump is actually a thing, in spite of how I  feel about it.  As a loyal American citizen, it is my duty to support the President.  This I will do, as part of the “loyal opposition.”

We do have certain rights as citizens, though, one of which is the freedom of expression.  I plan to exercise this as much as possible to praise President Trump when he does something praiseworthy, and shame him when he does something shameful.  Unlike a king or an despot, the President of this country is fair game for criticism — at least until the law is changed. That’s not as outlandish as it sounds, given the mental condition of our new chief executive and the Supreme Court he is methodically building.

This site is the work of Gregory R. McGee, and others that I invite to contribute, or re-post.  Gregory McGee is my real name.  If you want to complain about anything on the site, feel free to send me an email using the contact form, and I will respond.

Since I left home back in the 60’s, I’ve been a seeker of truth on a random walk through life.  I’ve studied many religions and philosophies.  I have no agenda to convert or divert anyone from their spiritual path if they have one, only to urge people to wake up and become aware of your surroundings and question who, where and what you are.

I’ve written and directed dramatic films,  written songs, articles and poetry.  I’ve done my best to live an ethical life, with a mind open to challenging ideas and growth.  I don’t claim to know the answers to any of life’s mysteries, but I continue to pose questions,  explore possibilities and imagine reasons for our existence that most people never take the time to consider.

In a nutshell, if you just do like it says below, things will usually turn out OK.