Gerrymandering is wrong, but it’s inevitable because the very existence of districts in a national election make the voting public the bitch of the incumbent party. The party hacks draw district lines so that their voters are the majority in a majority of districts. 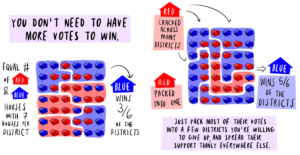 Perhaps we should look at the problem from another viewpoint.  Historically, voting districts sprang from the fact that it was impossible for the federal government to project power to the local level with the technology of the time (horses, pen, ink and paper.) The system of “districts” was devised to overcome this by transferring the responsibility of monitoring elections to the local level, so that local officials could make sure elections were free and fair. But, as Lord Acton observed back in the 1900’s,

The system devolved into the current train wreck we have now: a built in bias toward the power elite that has always controlled the country: rich, white guys.

Scrap Districts All Together!

I say it’s time to scrap the districts. We don’t need ‘em any more.  We have the technology to service millions of voters at the same time, accurately and securely record the votes, and post the results back to the public in minutes.

We’ve been watching it happen on American Idol, The Voice, and lots of other TV shows. Facebook, YouTube, Google, Amazon…any website can do it with off the shelf software. Imagine a presidential debates, followed by a votes, where 1 candidate gets knocked out of the competition every week!  It’s just not that difficult.

Using existing technology, we can achieve the holy grail of democracy:

ONE MAN ONE VOTE.

Party machinery and power struggles that end up giving the advantage to small, powerful groups can be ended.  NOW.  All it takes is one law:  Make districting Illegal.  Buy the technology from NBC or FOX TV to count and process the votes.  BAM.  Fair elections. No BS.