NOTE:  THIS IS A WORK OF SATIRE.  SIMILARITIES TO THOSE LIVING OR DEAD ARE INTENTIONAL AND ENTIRELY FLIGHTS OF FANCY

Location and Date withheld due to security.

President Trump is already at the bar when I arrive.  He’s not his normal jovial self.

PRESIDENT DONALD J. TRUMP (TRUMP)  Cut this Sh#t, you old fart and buy me a drink.

GOF: (to the Bartender) I’m with her.

GOF:  My, aren’t we touchy this evening.

TRUMP: You would be too if you had a zillion people wanting to look up your skirt 24 hours a day.  This is the worst job you could imagine.

GOF: Oh, come on.  You’re the president, it couldn’t be all that bad!

TRUMP:  That place is a dump. The white house? Jeez. Bigly, Bigly needs a renovation, and an interior decorator.  Melania was just appalled.  I can’t even get her to spend the night with me in Washington.  “No way I’m sleeping in the same bed as that old fart Washington if this is his stupid town. He had wooden teeth, and the traffic here is just appalling.”  Jeez.

TRUMP:  All a part of the plan, my friend.

TRUMP: I told you last time. I’ve got to have people to fire.  It’s what I do best.  Makes me look like the hero riding into town.

TRUMP: (his eyes light up) Yes!  I like that.  Donald Trump, The Lone Ranger.

TRUMP: Well, that’s Pence, of course.  But he’s sort of a stick in the mud.  Boooring. But loyal. Man, you always have to rain on my parade?

GOF:  So what’s this I hear about the DISS thing?

TRUMP:  OK, yeah.  I really got Dissed!  Who knew that name was going to be so right.  Sure, so I’ve got this disin disin… whatever the hell it is.

TRUMP:  Whatever.  Sure.  Since I was a kid.  They had me on these terrible pills and I couldn’t think, you know.  Just horrible shit and I was so boring then.  Look at me now.  I got the world’s most beautiful woman.  And I’m President.  Now that’s a success story, right?

GOF:  So you do have this disinhibition syndrome, but you’re not taking the medications prescribed by your physician?

TRUMP:  Yeah, ol’ Dr. Woo pissed me off with that other story you ran. Fired his ass. He’s back in some saggy little clinic in the back woods of Nowheresville. You’ll never hear from that *ssh*le again. China. I sent him back to China. Fart, I checked into getting you deported too, but unfortunately, you’re an American Citizen.

GOF:  Yeah, born and raised in Texas.  Sorry to disappoint.

GOF:  Well, don’t shoot the messenger.  He said you owed him some money and my inner journalist just had to…

GOF:  But you really can’t do that, Mr. President.

TRUMP:  Yeah, I know.  Feels good to say though.  Kind of like a movie, right?  Like Shawn the guy with the guy who was bond for a while?

TRUMP:  Yeah!  Man, I’m sort of like him, right? But better looking.  I mean, he was sort of a 3rd rate movie star anyway.  Hasn’t done shit lately, right.

GOF:  I would’t be screwing around with Sean Connery, Mr. President.

GOF:  Well he’s a Welshman, and they are pretty crazy.

TRUMP AND GOF: My name is Bond.  James Bond…

TRUMP:  Can’t be worse than Arnold!  That traitor!

TRUMP:  Oooooh.  I give him his big shot on the highest rated TV show, and he ruins it.  Terrible ratings! To launch his career! And he insults me. The guys a loser.

GOF:  You do realize he starred in like 10 of the biggest Hollywood blockbusters in history, and was governor of California for 2 terms?  He was sort of doing you a solid, beings you got surprised by thus Presidency gig.

GOF:  So, what about this DISS poster boy thing?  What happened?

TRUMP:  Yeah, yeah.  That’s what started this whole thing.  I was doing a favor for this group for disabled people like me.

GOF: The DISS?   The Disinhibition Information and Services Society? My sources say that their idea was to pump up your visibility a bit with this Presidential Run.  Then, hire you as the poster boy for the DISS?

TRUMP:  Is that what you heard?

GOF:  Well, I can’t reveal my sources, or I’d have to shoot you.

TRUMP: (Looks at me like he’s going to kill me.  Then laughs out loud.)  Haaaaa!  You had me there, you old Fart!

GOF:  I’m lost in the weeds here You want to play another game, Donnie Boy?

TRUMP:  But, see, I didn’t want everybody knowing I’m screwed up in the head, you know. Who’s going to elect a president who’s like a gimp or like epileptic or some funny looking sh*t.

(He does his now familiar impersonation of what he considers to be a “gimp.”) 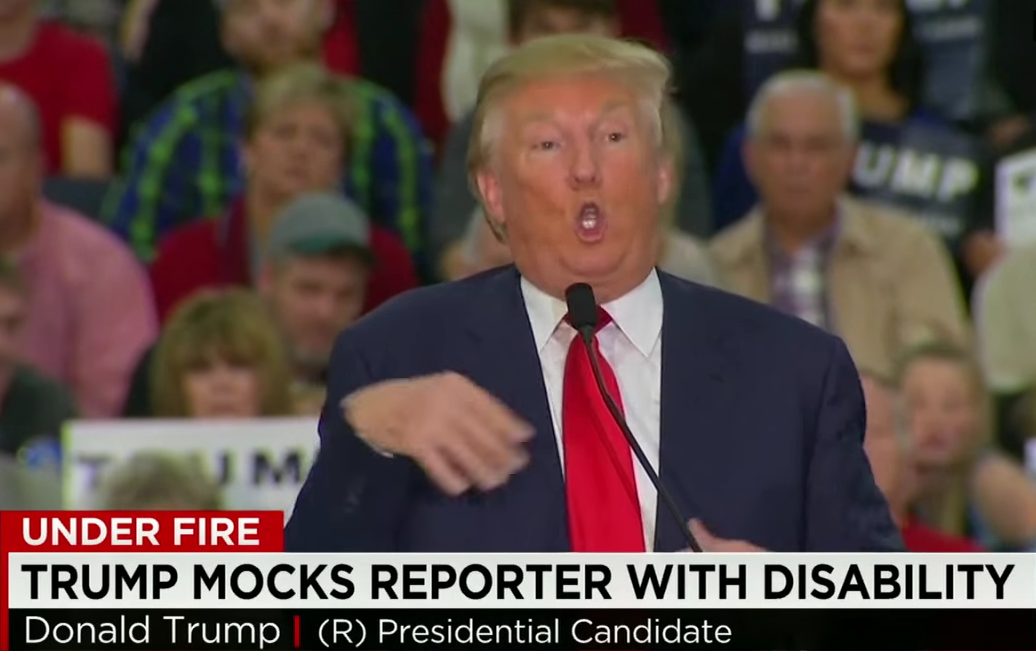 TRUMP: So I pulled the plug, and they leaked the whole thing.  More fake news, leaked to the fake press.

GOF:  But this is actually true news.

TRUMP:  Details, details…Did I say that?

TRUMP:  Prove to me that I said that.  Play me the tape.

GOF: You know I don’t tape these interviews.

TRUMP: No you don’t

GOF:  I forgot what we were talking about.

TRUMP:  That means its time for another round. This one’s on you.

GOF:  Really?  Don’t you get an expense account or something?

TRUMP: (Now, I think he’s doing an impersonation of Hitler) I am the President who is going to balance the budget, and it starts with you paying your fair share of the drinking.

TRUMP: Don’t be a smart ass.

GOF: That’ll take about 1 trillionth of a second off the 42 million years it would take to pay off, aside from the fact that it’s going up faster than you can actually count the hundred dollar bills evaporate.

TRUMP:  Are you finished?

GOF: With what? I’m just saying.  On my salary, I can’t drink the top shelf stuff every day like you.

TRUMP:  Simple Question.  Are.  You. Finished?

TRUMP: Jeez, you old Fart.  I thought you were my friend.

TRUMP: Its damn lonely at the top, you know?

GOF:  Never mind.  You don’t need to know who that is right now.

GOF:  So, is there going to be any more promotion on behalf of the DISS?

TRUMP:  I refuse to answer on the grounds that its none of your damn business.

GOF:  And you’re going to go back on your meds, so you don’t do something awful to the country?

TRUMP:  I refuse to answer on the grounds that its none of your damn business.

GOF:  So that’s where we are now, buddy?

TRUMP:  Fake laugh.  I’m just practicing for my senate hearings, whenever they find something and try to string me up by the balls.

TRUMP:  AMAZING.   Terrible. Ol’ Putey’s a real piece of work. He wants the biggest cabin.  And he’s not even going to bring a wife or plus one.  Wants to play the field, he says.  I think he’s just holding out for one of my daughters, for which I may have to strangle him in his sleep.

TRUMP: He says he’s a little short on this stuff called heavy water.  What is that?  Heavy water? What’s wrong with regular water, anyway?  And I don’t even drink the stuff anyway, I drink Scotch.

GOF:  What does he want with it?

TRUMP:  What do I look like?  A damn scientist?  I don’t know. Anyway, he’s kind of putting the thumbscrews on and says if I can’t deliver, we’re going to have to let this Macaroni dude from Argentina come, ‘cause he’s got loads of this crap.

TRUMP:  You know this clown?  I hear he once swallowed his own moustache and had to get his  Hiney  likker maneuvered.  Ha ha ha ha.

GOF: Well, Argentina is the largest producer of heavy water in the world.

TRUMP:  That could be it.  Probably.  Hey, you know…its all veeeeery mysterious, I’d say.  Even the Pope is weighing in on this one.

TRUMP: Or send you to GitMO.

TRUMP:  What do you hate more than anything?

TRUMP: Well that settles it.  I was thinking the Frozen North would be better, but Cuba it is.

TRUMP:  Now get the F*&ck out of here before my next date arrives.

TRUMP: I’m kidding.  What, you think I’d step out on the world’s most beautiful First Lady?  You think I’m an idiot? Its date night with Melania, and if I’m late it’s like, you know, (makes a “cuts my throat sort of gesture.)

TRUMP: Hey, dude, I always feel a little bit better after our interviews.  Maybe it’s because I feel like I can tell you just about anything.  Because nobody in their right mind would ever believe a word you say, even if they do stumble across your silly little Gazzette thing.  And then I’d just deny it, and you’d be in Gitmo for the rest of your life.

GOF:  Sounds great to me.  I mean, terrible.  Sounds terrible. (Now, I do an impression of Briar Rabbit, “Please don’t send me to the briar patch, anything but that!” with a horrible high pitched, southern redneck twang.)

A Secret service dude suddenly appears out of nowhere and before I know it, I’m out on the street walking along in the rain, two blocks away from where I thought I was.