At this summer’s ACL LIVE in Zilker park, I went to see Willie, because, well, I love Willie.  Enough said about that.

So.  I was standing there in the surging, sweating, stoned out, exuberant crowd, waiting for my muse, my hero, my…well, you know, “patron saint of music” to wander out on the stage and do his thing.

Which he did.  And, even though he kind of sleepwalked through the medley of a miniscule sampling of the 330+ songs he’s put on the charts in a musical career that goes back to 1956, I was feeling sort of overwhelmed that this uber-person was right there, just blowing out all preconceived notions of what a person should be, can be, could be, and how a person should behave at the ripe young age of 83.

The “medley”, of course, is the albatross that a musician with the longevity, expertise and fame of a person like Willie must endure.  His songs are, without question, awesome. And I yearn, as anyone who loves Willie, to hear them every day.

But think about Willie.  He’s been playing these songs for 40-50 years. And, at the age of 84, he’s STILL writing songs! 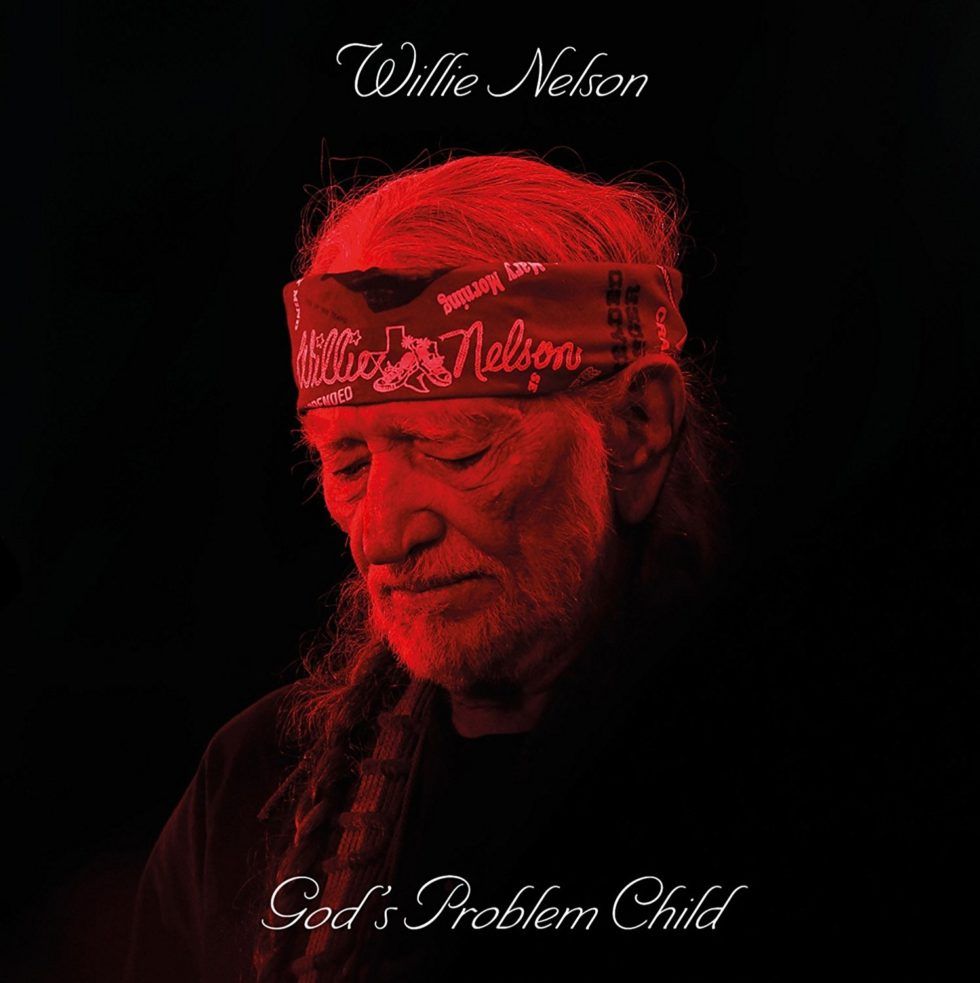 In fact, he just dropped an album, “Gods Problem Child”, on April 29, the day before his 84th birthday, with 13 NEW SONGS that will absolutely rock your world if you just sit back and listen to them in a quiet place.

At times, I consider myself to be a songwriter.  I try.  Occasionally I think I have a reasonably good one, because,  I like it and it makes me feel good to play it and listen to it.

But, when I listen to Willie’s latest album, or any other of his albums, I’m reduced to tears on many occasions, and humbled by the wisdom and mastery of his songwriting and performance.

“Gods Problem Child” is 18 NEW songs that are 10 times as good as the ones he wrote when he was in his 30s and his 40s and his 50s.  And, considering that those songs include “Crazy”, and “Ain’t it Funny How Time Slips Away,” “Whiskey River”, and “Angel Flying to close to the ground”, and on, and on, and on….well… it’s a high bar to leap over.  But he does it.  With a wicked smile.

Of course, people just want to hear the old stuff, and, Willie knows that, so he gets out there on the stage and delivers the “discovery of Willie Nelson” that the fans demand.

Can you imagine doing anything in your life 10,000 times?

I can hear Willie talking to his dog.  “If I have to sing Crazy one more time, I’m just going to… just roll me up and smoke me…”

Now, any “normal” person wouldn’t do anything that many times because it’s just god awful boring.

But it’s part of the job, and Willie’s kind and wise enough to realize this.

And he’s never claimed to be normal, of course.

So he does it.  Night after night.

This is only 1 of the reasons why I LOVE WILLIE NELSON.

OK, so I’m standing there in the crowd and the pungent aroma of  the herb that I call “God’s Gift To Mankind” is all around, and I’ve had a couple of beers, and it’s just, you know, pleasant.  Kind of like church. I’m basking in the presence of this awesome human being Willie Nelson.

He plays some new songs that I’m loving, but the crowd is restless because they’re a bunch of millennial self-absorbed dipshits who don’t know anything about Willie.

So the set is over and this 20 something dude looks over at me. (note:  I’m 66, and he figures I must know something about this wrinkled old fart up there on the stage.  He was from Dubuque, I think.  He and his gal had just blessed me with a few tokes from their fabulous joint, so, you know, I was appreciative.)

ME:  I guess you could say that.

MD:  So, what’s the big deal about this guy?

NOTE:  I think he saw my ears get red.

MD:  I mean, he’s just sort of, you know, lame. . What’s the big deal?  Why is everbody freaking out this about this guy and shit?

My first inclination was to just clock this guy, and give him a 5-minute rant about Willie.  But, fortunately, I’m a little more mature than that.  And, I’ve realized over the years that people are actually entitled to their own opinion, no matter how much they differ from mine.  What I realized in my temporary time warp into how the hell I should handle this question, thanks in part to the excellent MJ that MD had shared with me, was that, what was missing here was simply some education.  This poor schmuck, who “that’s right, you’re NOT FROM TEXAS,”  was not a bad person, it’s just that he didn’t know what the hell he was talking about because this was probably his first encounter with Willie Nelson, and it had been over-sold by some other dipshit who might have heard “Crazy” on the radio and thought it was just released last Tuesday.

BACK TO THE STORY

MD:  I mean, did he used to be better than this, or something?

ME:  Been a country music fan for a while?

MD:  Not so much.  I’m kind of into, you know, shit relative to today, you know.

ME:  So why are you over here listening to Willie?

ME: Right on, Gal!  (we did the secret handshake.)

ME:  Are you a musician?

Now, can you imagine getting up there on a stage like that wrinkled up old fart just did, in 99 degree weather, and 100% humidity, with hot ass lights and sweaty stinky ass people, and singing in front of, what we got here, 2000 people?  And, by the way, he wrote all those songs he just sang.  Could you do that ONE time?

MD:  What the actual fuck…

ME: Can you imagine what you’re going to be like when you’re 83?

MD:  Shiiiiit.  I ain’t going to live that long.

ME:  Well, I’ve got bad news for you, brother.  If you’re just halfway sane, and you don’t get cancer or get drunk and have a car wreck or become a drug addict or just get fat and lazy and become a diabetic or have a heart attack because you don’t take care of yourself or…well, there’s a chance that you could reach the ripe old age of 83.  Probably 103.

MD:  Shiiit.  Nobody.  My Great Grandmaw died at like, 60 or something.

ME:  See what he did just now?

ME:  He’s won every award you can get in music, he’s sang for Presidents and queens, he’s…well, there probably aren’t many people on Earth who have NOT heard about Willie Nelson.

ME:  So, to answer your question.  Yeah.  He used to be better than this. But did you notice how much different it was when he did his new stuff?  Like, “Are you sure this is where you want to be?”

MD:  Right.  Now that WAS the shit, right there.

ME: Absolutely! But like I said, he ain’t done yet. He’s still writing songs. He’s not just coasting on his catalog, you feel me?

ME:   But don’t take my word for it. You got your little iphone there, right?

ME:  Just Google it.  Yeah. Look at the Wiki on him.  Go home tonight, and open search for Willie Nelson on youtube.

ME:  Just roll up a fat one, sit back and listen.  It won’t take long for you to fall in love with Willie Nelson.

ME:  I feel the same way.  And I’ve felt that way for like 30 years. You should just consider yourself blessed that you actually got within a mile of Willie Nelson while he is still on the Planet.

We hugged, and I’ll probably never see him again.  But, I have no doubt he’ll be a Willie Nelson fan for the rest of his life.

Here’s my truth.  If I’d actually taken this advice from myself when I was 20, or 30, and just rolled a big fat one and listened to the music of Willie over the years, I’d have saved about $50,000 in religulous bullshit and chasing windmills such as EST, Scientology, Christianity, Buddhism, Atheism, Transcendental Meditation, ad infinitum….

Everything you need to know about life, liberty and the pursuit of…. is on “The Red Headed Stranger.”  And this is just the icing on the cake.

Everything you need to know about what getting old is going to be like, well, that’s “God’s Problem Child.”

And trust me children:  you are all going to get old. Ignore this fact at your own peril.

It’s not that much fun if you let it sneak up on you.

I know this, because I have let it sneak up on me, and the tail end of my life doesn’t look to be anywhere as much fun as the first half.

Cue it up.  Close your eyes, and listen to the whole thing.