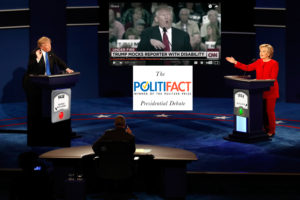 EDITORS NOTE:  THIS IS SATIRE. IT DID NOT HAPPEN.  HOWEVER, IT MAKES A LOT OF SENSE. THIS IS SUGGESTIVE SATIRE.
This reporter has just learned from sources within the major networks that a new debate format will be used the next time the Presidential hopefuls Hillary Clinton and Donald Trump meet.
“We in the news media are sick and tired of the blatant discombobulexity that is being used as a campaign strategy, especially by the Republican Party, in this election,” a source from within the Fourth Estate told me today.
“The next debate is going to be sponsored by the well respected and trusted company Politifact.”
During the debate, a staff of thousands of individual professional and volunteer fact checkers will be working in the background, in real time. Every time a candidate says something that might be considered a ‘half truth” or an outright lie, Politifact’s thousands of fact checkers will immediately go to work, and within seconds, present video or photographic evidence that supports or debunks the claim. This way, if a candidate says something that is not true, such as when Gov. Mike Pence,in the recent Vice Presidential debate, insisted that Donald Trump never said that he thought South Korea and Japan should have their own nuclear weapons, the video evidence can be displayed immediately on a screen behind the candidate.

“We have the technology. Why not use it? Why should these politicians be able to stand up on prime time TV and lie their asses off without being held accountable?”

Politifact is working with the major networks to develop a video switching system never seen on primetime television before, where video from any of 5000 HTTP connections providing high definition video can be sent directly to the video monitors on the debate stage in real time.

“This is a moon shot,” the spokesman said. “It is what we desperately need to bring truth back to politics.”

The project will require multiple layers of content editors and video directors to provide instantaneous programming live, on demand, and massive bandwidth to be able to select the most relevant, accurate and highest quality footage located by our pre-registered fact checking volunteers. It will be a joint production between Politifact, CNN, NBC, ABC and CBS. Google will supply the search engine and their YouTube division has also committed to providing the best video streaming possible. SAG, AFTRA, and other licensing organizations have promised to suspend all restrictions for the duration of the debate.
Politifact has already begun recruiting volunteer fact checkers, and will begin the process of “vetting” prior to the debate. The most accomplished video directors and producers are already lining up to get involved in this exciting, groundbreaking project.

“We want to make sure that all political parties as well as independent, non affiliated folks will be fairly represented in our fact checker pool. We’re just looking for the truth. If we can just get these candidates to tell the truth about who they are and what they are proposing to do if they get elected, then we sincerely believe that the American people will be smart enough to make the right decision for the future of our nation. If this isn’t true, we’re screwed anyway. We gave it our best shot.”

I reached out to the Clinton and Trump campaigns for their comments on this exciting new debate format.
Hillary Clinton answered in person. “I think it’s a great idea! You can’t imagine how many times I’ve wished I could just snap my fingers and bring up the right video to prove my point on something, or prove that my opponent is lying through his teeth. This is a dream come true. But, I’m reeeely going to have to do my homework before this next debate! And believe me, I will!”
Donald Trump had this to say: “Losers. It’ll never fly.”
Please follow and like us: