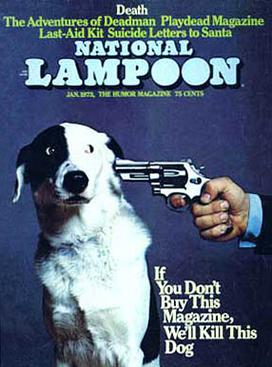 Perhaps the most infamous magazine cover ever published in America, it caused an uproar that still reverberates.  Its only saving grace was that we KNEW it was a joke because it said right there at the top of the page “National Lampoon.”

Unfortunately, Donald not only thought it was funny, he thought the concept was a brilliant way to make deals, and it became the cornerstone of his entire career.

Now as President, he’s still using this technique in just about every encounter.

Every “relationship” he establishes with other world leaders.  With the incredible power he wields as the leader of the world’s largest economy and largest military and nuclear arsenal, all he has to do is create situations where his adversaries are just too horrified by what might happen if they don’t do what he wants.

This is why he’s separating the children of illegal immigrants from their parents.  (to force Congress to act.  And to get Mexico to build a wall to keep US out of THEIR country.)

This is why he’s gutting the EPA and rolling back protections on waterways, national parks, offshore petroleum deposits.  (to force companies who are polluting to police themselves for fear of becoming pariahs on social media, which has faster results than legislation.)

This is why he’s imposing tariffs, even on our traditional allies. (fear of ruining economies, putting people out of work, public opinion turning against leaders.)

This is why he’s doing his best to remove restrictions on predatory lending and a host of other regulations.

Will these tactics work?

Maybe.  But, there are adversaries, such as China, OPEC, Russia, North Korea and the EU that are willing to take things to the brink of disaster, or even past it, just so they can WIN.  Who’s playing who? Who blinks first? Are there any adults, or is the entire world run by adolescent punks and bullies?

Oh, hell yeah.  Things happen a lot faster these days than they did back in ’73. Conflicts then took weeks or months to fester and then explode into armed conflicts, simply because it took longer for news to disseminate and mobilize populations.

Nowadays, the uneasy mob is subject to a steady stream of the outrageous lies, insane decisions, or the brilliant one-upmanship of a dynamic leader, depending on what side of the street you walk on.

Trump, so far, seems to be immune to public opinion and disdainful of the opinions of professional statesmen, military and law enforcement professionals and, especially, SCIENTISTS.

It seems like the Trumpster wakes up every day with a new idea to control the general social conversation and direct the dog-brained media’s attention toward what he wants and away from what he doesn’t want people to talk about.

There’s really no strategy other than intimidation. He’s winging it.

That scared dog with the gun to its head?  That’s US, the citizens of America.

However, there’s something Trump needs to know about dogs.  You can usually get away with shooting the FIRST dog in a pack because they don’t know what a gun is, and have no reason to expect you would want to harm them with it.