NOTE: This is satire.

In an exclusive interview with Donald J. Trump’s very personal physician, the odd language and almost childish misconceptions about what a medical report should read were finally clarified.  We reached out Dr. Mortimer Hoo, the physician who actually performed the complete physical exam. Here is a transcript of the phone interview. 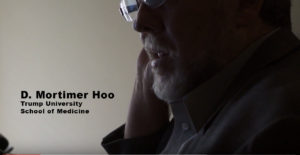 Who, can you tell us about Mr. Trump’s physical condition.

HOO: That would be a violation of client – patient priviledge.

SRG:  Its OK, Dr.HOO: This is strictly off the record.

SRG:  Can you be more specific?

HOO:Well, look at the guy! He’s morbidly obese, for crissake. Constipated all the time, sleep apnea, impotence, irritable bowel syndrome…you name it, he’s got it. He eats red meat 3 times a day, drinks like a fish, never exercises, except for his mouth.  He needs help getting up out of a chair.

SRG:  You seem to be a bit angry right now.

HOO: Well, yeah, I am! If that cocksucker would pay my bill every once in awhile I’d probably be in a better mood.  He’s into me for about $150 g’s.  I’m just a family doctor, not a rich muckety-muck like him.

SRG:  Can we get back to the medical report?

HOO: Sure, but make it snappy. I got patients waiting.

SRG:  The bottom line is, do you think he’s physically fit to be President?
HOO: No.  I predict he’ll have a coronary event in the first 90 days.

SRG:  What about the other report that was filed?

HOO: Bullshit.  The whole thing was made up. He took one look at MY report and shit-canned it.  I watched him throw it right into the can by his desk. Wrote his own.

SRG:  What about his mental condition?

HOO: Well, that’s not my wheelhouse, but its pretty obvious isn’t it?  The guy’s batshit crazy.